Agriculture Secretary Russell Redding announced that eight counties, including Wayne, have been added to Pennsylvania's Spotted Lanternfly quarantine zone ahead of the 2021 spring hatch. With this addition, the quarantine for this invasive pest is now at 34.

With its significant potential impact on the economy and natural resources, the state Department of Agriculture issued a quarantine in the hopes of restricting its movement. Most counties in the eastern part of the Commonwealth are under a limited movement quarantine as federal, state, local and non-government cooperators develop a strategy to eliminate this invasive species.

Designed to Slow the Spread

The Spotted Lanternfly was first detected in Berks County, PA, in the fall of 2014. With its significant potential impact on the economy and natural resources, the state Department of Agriculture issued a quarantine in the hopes of restricting its movement. All counties in the eastern part of the Commonwealth are under a limited movement quarantine as federal, state, local and non-governmental cooperators develop a strategy to eliminate this invasive species.

Native to China, India and Vietnam, the Spotted Lanternfly has also been introduced 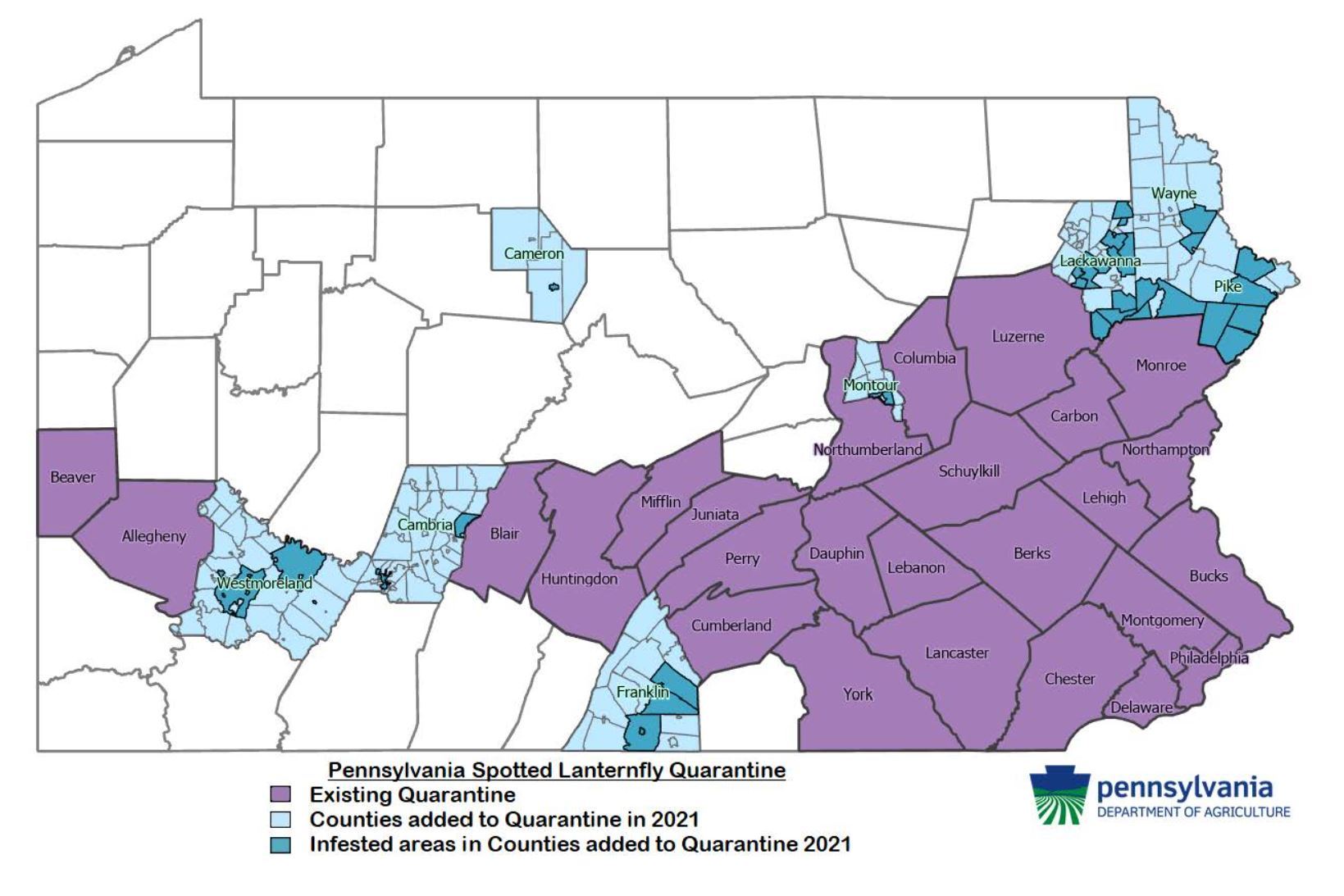 in Korea where it is known to feed on more than 70 species, 25 of which can be found in Pennsylvania. In the United States, it has the potential to greatly impact the growing of grapes and fruit trees, and the plant nursery and timber harvesting industries.

“This pest poses a significant threat to the state’s more than $28 million grape, $87 million apple, and more than $19 million peach industries, as well as the hardwood industry in Pennsylvania which accounts for nearly $17 billion in sales,” according to the PA Department of Agriculture. Early detection is vital to the effective control and the protection of PA agriculture and natural resources-related businesses.

In the Spring, beginning in late April to mid-May, search for the nymphs on smaller plants and vines, and any new growth on trees and shrubs. Fruit trees and grapes may be more susceptible to damage and mortality when larger populations of Lanternflies are found nearby. 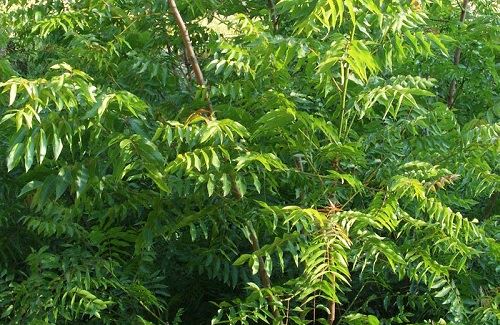 As they approach maturity, adults will migrate to Tree of Heaven or Paradise Tree (Ailanthas altissima) as a primary host, and may be seen feeding on the trunk and branches, which can be afflicted with weeping wounds of sap. Heavy populations may causing honey dew secretions to build up at the base of the tree, blackening the base of the tree and surrounding soil around the base with sooty mold fungal growth. Increased activity of wasps, hornets, bees, and ants can be seen feeding on honeydew secretions and at tree wounds.

The egg mass poses, perhaps, the greatest risk for accidental transport of the Spotted Lanternfly to new areas.

In large population areas, adults will also be seen feeding on other trees in the surrounding area, including willows, maples, poplars, tulip poplars, birch, ash, and others.

The Spotted Lanternfly begins laying eggs in masses of 30 to 50 eggs, covered in a brown, mud-like substance, in late September or early October.

Since 2014, Pennsylvania has been awarded $5.5 million through the Farm Bill to perform control work, conduct research, and implement outreach to affected citizens. Most of the award was made available to the Pennsylvania Department of Agriculture to implement control and perform survey work. Efforts will focus on identifying the host range 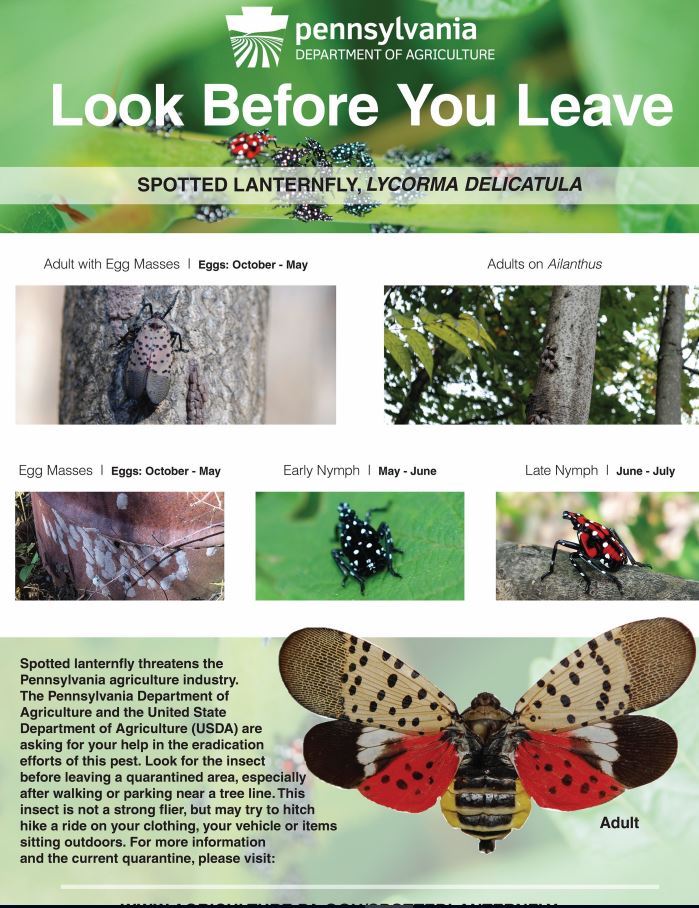 of the pest, its impact on grapes, and an analysis of its DNA. A grant to perform outreach and extension was also awarded to Penn State University.

Residents can take steps personally to limit the chance you may spread Spotted Lanternfly by using the "Spotted Lanternfly Quarantine Checklist"to make sure items on and around the home are pest free before moving them.

If you find one, turn the adult specimen or egg mass in to the department’s Entomology Lab for verification.

All residents and businesses must comply with the SLF order and regulations. To protect neighbors and communities, the agriculture industry and Pennsylvania's business vitality, everyone needs to be aware of the risks and how to utilize best management practices in their daily activities to avoid spreading SLF.

The following are examples of regulated articles:

In Pennsylvania, the Spotted Lanternfly overwinters in egg masses laid on smooth bark, stone, and other vertical surfaces. The first of four immature stages, or instars, begin emerging from the egg masses in mid-May, with a few individuals that had molted to second instar nymphs by the end of May. Nymphs spread from the initial site by crawling or jumping up any woody or non-woody plant it comes across to feed. In Korea, the Spotted Lanternfly is known to gradually prefer Tree-of-Heaven/Paradise Tree (Ailanthus altissima) as it nears the adult stage, another introduced invasive species in Pennsylvania.

Adults can be seen as early as the middle of July and take on a much different appearance. Adults at rest have a black head and grayish wings with black spots. The tips of the wings are a combination of black rectangular blocks with grey outlines. When startled or flying, 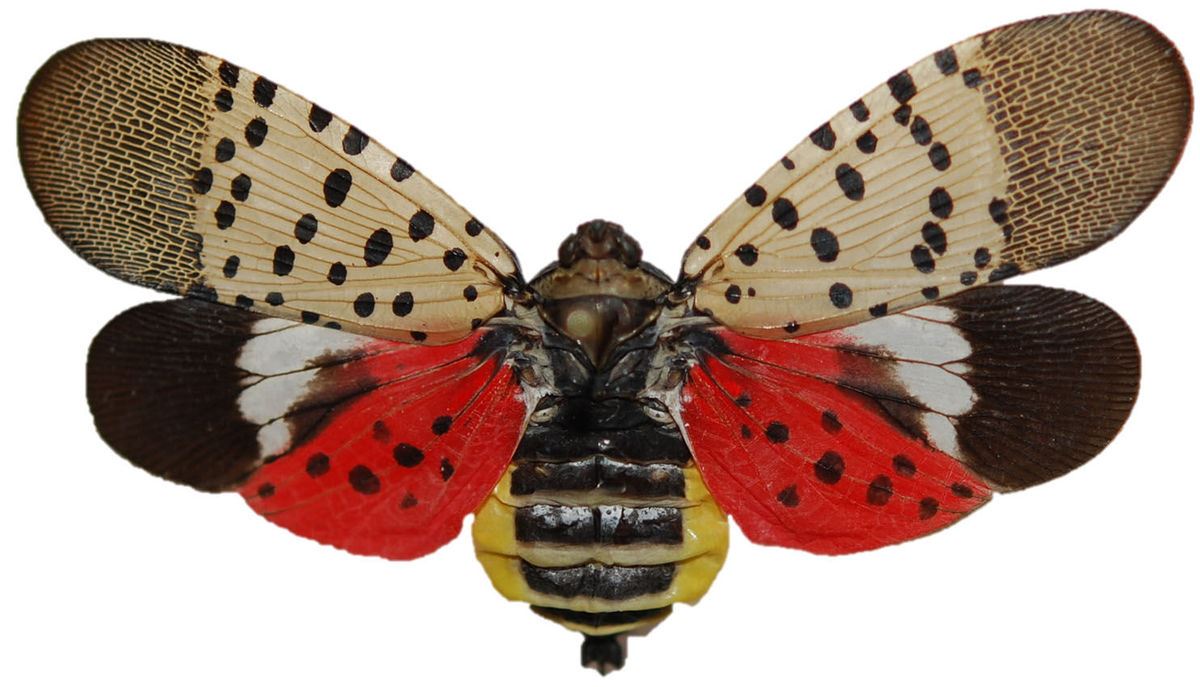 the Spotted Lanternfly will display hind wings that are red at the base and black at the tip with a white stripe dividing them. The red portion of the wing is also adorned with black spots. The abdomen is bright to pale yellow with bands of black on the top and bottom surfaces. While a poor flyer, the Spotted Lanternfly is a strong jumper.

Tree of Heaven is not the only tree or surface the Spotted Lanternfly will lay eggs upon – any smooth trunked tree, stone or vertical smooth surface can provide a potential host for eggs masses. Manmade items like vehicles, campers, yard furniture, farm equipment or any other items stored outside are suitable sites for egg laying. Egg laying begins in late September and continues through late November or early December. The egg mass poses, perhaps, the greatest risk for accidental transport of the Spotted Lanternfly to new areas. 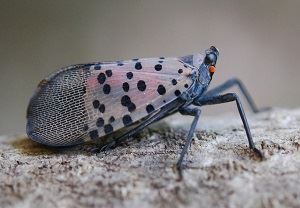 Submit photos of any life stage, including egg masses: